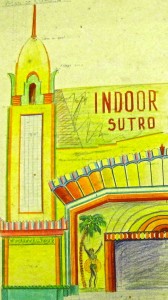 Keeping Architect Harold Stoner’s Tropic Beach brilliant color scheme looking its best was a challenge according to a 1950 article in the San Francisco Chronicle recently shared with me by John Martini, the author of Sutro’s Glass Palace. The article describes the “modernistic towers” outside the entrance to the Sutro Baths with “their facets brightly colored in canary yellow, electric blue, apple green, and vermillion … as one of the most undiluted to be found outside a children’s crayon set. Anywhere else the pure colors might be said to look garish; but somehow out in front of the Tropic Beach, it is becoming.” Manager Robert A. Bratton explained to the reporter how difficult it was to keep the colors bright despite the fog and corrosive salt air. Because of the frequency of repainting needed, it was decided to hold a coloring contest for future color scheme ideas. 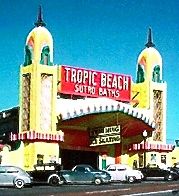 Mimeographed line drawings of the front of the building were handed out to children who were visiting and an astounding 540 variations were submitted.  The winner was a girl named Arlene Morris who trimmed her entry with lace and red silk ribbon. “Now,” Bratton beamed, “we have color schemes to last us indefinitely!” 1950 Sutro’s Ancient Attic, SF Chron, 8-13-1950 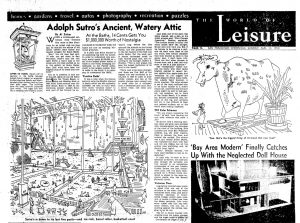