A Century Ago Today – Bessie Left her Heart in San Francisco

In 2001, when I embarked on what would become a very interesting and unexpected journey researching my father’s family , I realized that most of them left few clues of who they were or what they did. Information in various government records provide some idea, but not the whole story. Records of female ancestors are even more limited because of name changes from marriage. I have been especially curious about Elizabeth Clare Warriner, the sister of my great grandmother, Jennie Olivia Warriner Liggett. A family member called her Bessie Young and told me, “she could go to a musical program and play it back at home on the piano by memory. She eventually moved to San Francisco to perform.” As the only other family member to ever live in San Francisco, I have been hoping there would be more information about her right in my own city. The search has been fruitless until this year.

Born in Milford, NE on March 19, 1889, Bessie was the youngest of Harlan and Lucy Warriner’s three children. The family had a store in Utica, NE when her sister, Jennie, met my great grandfather, James Bela Liggett.

Bessie was a young seven years old, when she and her brother, Harry, moved to San Diego with their parents around 1896. Harlan Warriner’s 1896 Voter Registration listed their address as 624 Irving Avenue. Business directories show them living here for many more years. 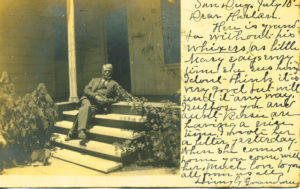 The family had a business, Warriner and Son Wholesale Notions, at 715 4th St. near G in San Diego, which is now called the Gaslamp Quarter. Business directories list Bessie Warriner living in San Diego through 1907, when she was 18 years old. 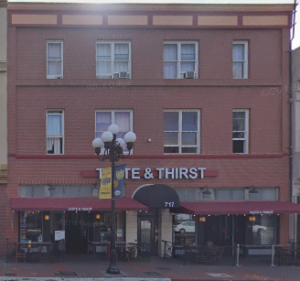 Finding nothing about Bessie Warriner after 1907, I have found only one record of Bessie C. Young living in San Francisco. In the 1910 Census, she was living at 968 McAllister St. She told the census worker that she was married, but a Mr. Young was not listed in the names of fellow lodgers at this address. Apparently fulfilling her desire to be a full time musician, she listed that as her profession, and working as a piano player. The record also states she was out of work on the date of the census (April 15,1910) and had been out of work 9 weeks in the previous year. 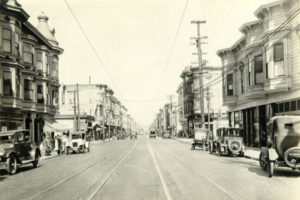 This area of San Francisco, called the Fillmore District, was filled with beautiful Victorian homes and a lively musical scene. The National Theater, built at Steiner & Post, regularly featured the young Al Jolson, who sings there for $60 a week. The McAllister St. rooming house and much more of the area  was razed during a redevelopment of the area in the 1960s. The Fillmore Auditorium built in 1911 is still there.

San Francisco was booming in 1910 as it had successfully rebuilt even bigger and better after the devastating 1906 Earthquake. Plans were underway to create the gigantic Panama Pacific International Exposition to celebrate the rebirth of the city. Opening in 1915, it is likely that Bessie was one of the millions who attended the fair. Bessie may have hoped for many more musical opportunities in what was the largest, and likely, liveliest city on the West Coast. Did she come on her own or with her husband? Women were looking for opportunities to move beyond the role of homemaker during her time in San Francisco, when women’s suffrage was approved in 1911.

My great grandmother, Jennie Warriner Liggett, and her mother, Lucy Ware Warriner, both died in San Diego in 1912. I found notices in the San Bernardino County Sun and the San Francisco Call newspapers dated Nov. 16, 1912, asking for help to find Mrs. Bessie Young, who had been out of touch for four years. 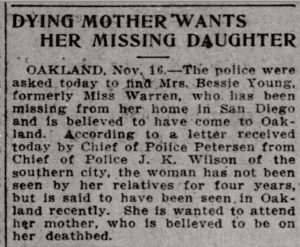 While the last named is listed as Warren, I believe it is an error because Bessie’s mother,  Lucy Ware Warriner died shortly thereafter – on Dec. 12 at the age of 60. It seems that Bessie’s life was just as illusive to her family as it has been for me.

A needle in a haystack unexpectedly turned up when a recent internet search led to a funeral record for Bessie in San Francisco under the name of Elizabeth Steward. The record confirms her 1889 birth in NE and the name of her parents, Harlan and Lucy Warriner.

Her obituary said she was survived by her husband, Charles Steward. She had been living at 21 San Jose Ave. near 22nd and Valencia Sts. when she died on Sept. 26, 1918. The location is just 3 miles from where I live and next to the landmark Lucca Ravioli Company. 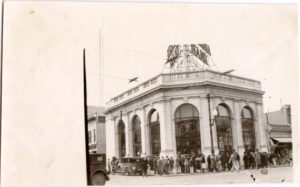 I have not been able to find any record of a Mr. Young or Mr. Charles Steward. Was Charles fighting the last battles of World War I in Europe? Searches for marriage licenses or other records have not turned up a clue. No surviving children were listed in her obituary, only her brother, Harry Warriner, who died in 1948. A family tree diagram says her picture was in the paper – in San Diego or San Francisco? I have not been able to find it. 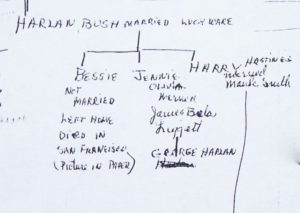 San Francisco banned burials within the city limits in 1900 and has relied on cemeteries in nearby Colma ever since. An apparent generous benefactor, John Maley Jackson, paid for her burial. A lithographer married to Orline Jackson and living at 3043 Steiner St., John paid for a lavender lined coffin from H.F. Suhr and Co. and internment at Cypress Lawn Cemetery in Colma, CA on Sept. 28, 1918. 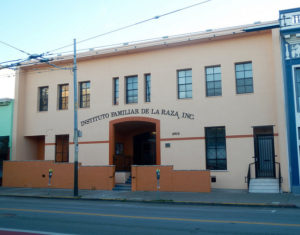 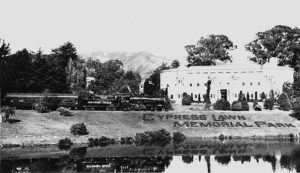 Bessie did not die from the 1918 influenza pandemic, but of a disease that had no cure and was one of the leading causes of death until the discovery of penicillin in 1928. I went to visit her grave a few months ago and found it lacking a headstone. I had one made for her. Married twice and having just lived 29 years, I wanted to make sure the musically talented Elizabeth “Bessie” Warriner Young Steward, who followed her heart to San Francisco, was not forgotten. 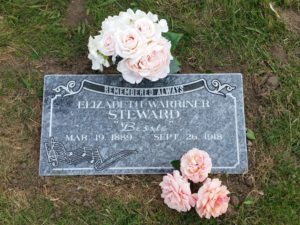