This rare film brings the history described in my book, San Francisco’s West of Twin Peaks, to life.  “Shot in the years after the great earthquake and fire which leveled The City, Twin Peaks Tunnel was intended to promote the development of Western portions of San Francisco. Twin Peaks Tunnel was shot by the Pathescope film company for a local real estate firm. It documents construction of what was then claimed to be the longest municipal tunnel in the world. The film includes footage of the construction of the tunnel and the clearing of Sutro Forest, as well as development of the West Portal, St. Francis Wood, and Westwood Park neighborhoods. City officials, engineers, workers and ordinary citizens are also seen in the film. According to historian David Kiehn, the film was produced for the Baldwin and Howell Real Estate Company, located on Kearny Street in San Francisco. Newspaper advertisements also indicate that the film was first shown on October 13, 1917 – most likely in a San Francisco storefront. It was popular enough to be continuously screened for weeks thereafter.”

The summary above excerpted from Thomas Gladyz’s article “Short Film with a Long History Plays at Niles,” Examiner.com, January 19, 2012 (http://www.examiner.com/silent-movie-in-san-francisco/short-film-with-long-history-shows-niles?CID=examiner_alerts_article).

Funds to restore and preserve Twin Peaks Tunnel were provided through a grant from the National Film Preservation Foundation. 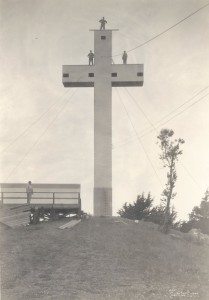 The historic cross on Mt. Davidson will be lit on Easter Eve this year, as it has been every year since 1926. The 103-foot high cross presently sitting atop San Francisco’s highest hill was dedicated in 1934. It was built to last with 750 cubic yards of concrete placed around 30 tons of reinforced steel that is anchored in a concrete block foundation that goes down 16 feet into the bedrock below. Many may not know that the massive solidity of this structure may due to it being the 5th cross built on Mt. Davidson for the annual Easter sunrise event.

The first cross was erected on Mount Davidson in 1923 for an Easter Sunrise Service organized by James Decatur and led by Dean J. Wilmer Gresham of Grace Cathedral. With over 5000 hiking before dawn to attend, the event organizers decided to continue it every year thereafter. Built in what was once a remote area of San Francisco, the 40-foot high wooden cross lasted for two more sunrise services, before it was burned down by  “young boys building campfires too close to it,” in Dec. 1925. A 2nd and much more elaborate replacement cross was built in 1926. It was described as being nearly 100-feet high. Wired with electrical lamps, it was the first to be illuminated every night during the week before Easter.

Few pictures of the older crosses exist and thanks to John T. Williams, I am able to share, with his permission, newly discovered and copyrighted images of what may be the only ones existing of the 1926 Mt.Davidson Cross being painted on March 3, 1928. In the picture above, see John’s father, James Williams, on top of the cross, with two other crew members just below.

The early crosses were located on the eastern downtown viewpoint atop Mt. Davidson, at the edge of the old property between Leland Stanford and Adolph Sutro. The cross pictured above didn’t make it through the winter, being destroyed by flames in December 1928. By March 1929, the San Francisco Examiner reported a 3rd cross being constructed: “big cross on Mt. Davidson lighted with wands of electrical lights.” It was also described as being more permanent, 76-feet high, and decorated with 300 lights. Purchase of the summit by the City for a public park was also completed in 1929.

One more temporary cross would be built on the hill before the fireproof one was constructed in 1934 at a new location further west. Surviving earthquakes and a trip to the California Supreme Court, it was once lit year round. Lighting is now restricted to two days a year and the permanent lights were removed to settle the lawsuit. The new owners, the Council of Armenian Organizations of No. California, now cover the cost of a portable generator to continue the tradition of illuminating America’s largest cross on Easter Eve with spotlights totaling 48,000 watts. See more historic pictures from John Williams at http://mtdavidson.org/mount-davidson-cross/. 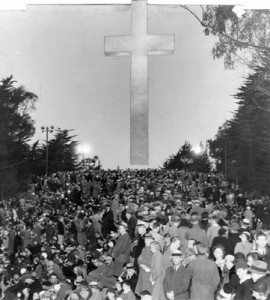 The Council of Armenian Organizations of Northern California purchased the Mt. Davidson Cross and surrounding property when it was sold by the City of San Francisco to settle a lawsuit in 1997. They have generously hosted the traditional annual Easter Sunrise service started in 1923, funded the lighting of the Cross on Easter Eve (this Saturday night), and recruited Anthony Catchatoorian to create this outstanding video invitation to come visit this very special part of San Francisco – Mt. Davidson: San Francisco’s Hidden Treasure.

Please help stop the destruction of 1600 historic trees and 3000 feet of trails in this San Francisco jewel by supporting the San Francisco Forest Alliance. 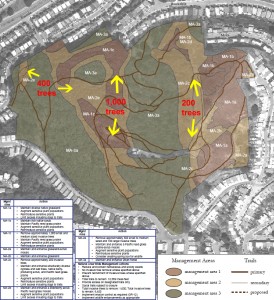 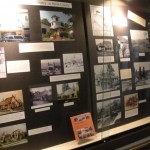 Who is Harold Stoner?

Woody LaBounty, former Director of the Western Neighborhood Project writes in his blog “Inside the Outside Lands:” “Thanks to the new book by WNP member Jacqueline Proctor, Bay Area Beauty: The Artistry of Harold G. Stoner, Architect, I find that the English-born Stoner was the visionary behind many west SF landmark buildings … [and] recommends her book to those with an interest in the beautiful, fascinating, and unusual architecture that can surprise out here in the Outsidelands.”

"A cozy strip of shops announced by this streamlined exclamation point."

Architect writer John King featured the Stoner designed building in San Francisco’s Lakeside District on Ocean Avenue in his April 25, 2010 Cityscape column for the San Francisco Chronicle,  “Colonial topped by a sci-fi twist … An Art Moderne tower with a hint of sci-fi, the flourish tops a two-story medical office otherwise cloaked in colonial garb … It rises from the rounded tip of a triangular block … the architectural equivalent of a map’s You Are Here — a simple but memorable landmark, retro and relevant all at once.”

John King added a follow-up on April 27th: “My Cityscape column on Sunday tipped a hat to Lakeside Medical Center, an Art Moderne tower from 1941 designed by Harold Stoner, one of the most prolific and influential architects working in the San Francisco neighborhoods west of Twin Peaks at that time. Turns out there’s an entire new book on Stoner, who could leap from storybook cottages to Spanish castles and give each a romantic air. Besides these upper-middle-class delights, he also designed the Tamalpais Theater in San Anselmo; a palatial mansion for Adolph Sutro that made way for Sutro Tower and — not verified, but too titillating to omit — the facade of Sally Rand’s Nude Ranch at the 1938 Golden Gate International Exposition. Bay Area Beauty: The Artistry of Harold G. Stoner, Architect is by Jacqueline Proctor and Joyce Hendrickson. It’s available at www.Jacquie Proctor.com.” 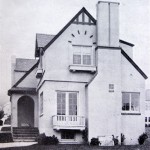