Iconic Design by Harold G. Stoner on the Market 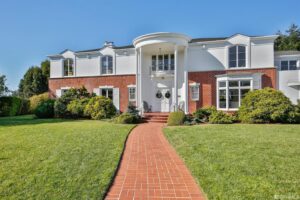 On the market for $4,000, 000, this home was designed by Harold G. Stoner for Henry Stoneson, the developer of the surrounding Lakeside neighborhood and Stonestown Shopping Center. In 1941 The San Francisco Chronicle reported that Henry Stoneson had spent $60,000 for his own 12-room mansion at 100 Stonecrest Drive. The largest home in the neighborhood, it “was excellent evidence of the aristocratic, intelligently planned nature of the Lakeside development.” The home’s main floor included a game room “0f nearly ballroom proportions,” with its own cocktail bar which opened out into the rear terrace and badminton court. Described as a Moderne version of California Colonial, Harold Stoner’s balcony design is expanded here to four windows with a semi-circular porch roof supported by tall colonial pillars over a grand double-door entrance. “The luxurious entrance hall has as its outstanding feature a winding staircase with its hand-wrought railing,” leading to three bedrooms and two bathrooms – which appears to have grown in number – along with the cost of the house!