Behrend Joost had high hopes in 1891 for his “creme de la creme” of subdivisions, naming the streets in the Sunnyside neighborhood he created in San Francisco after millionaires: Flood, Spreckels, Mangels, and Joost himself. Behrend Joost, Claus Spreckels, Claus Mangels, and his sister Anna Christina, were all from Hanover, Germany. Anna Mangels and Claus Spreckels were childhood sweethearts in Hanover and married in 1852. Anna’s brother, Claus Mangels, married Emma Zwieg. 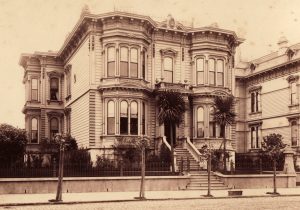 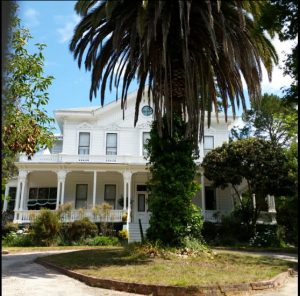 Mark Reed adds, “Claus Spreckels purchased the Aptos Rancho (about 5000 acres), and sold his brother-in-law Claus Mangels about 550 acres, now most absorbed by the adjacent state park. This is the Claus Mangels home in Aptos (left).  Claus Spreckels built a near identical house in Aptos too. Claus Mangels was closely associated with his brother-in-law in brewing, sugar refining, and shipping enterprises, and was a director of Spreckels’ Hakalau sugar plantation in Hawaii. However, Mangels also owned significant commercial property downtown (SF) in his own right, including a major hotel. I’m not aware of the exact relationship between Mangels and Joost, could be either social or business. However, I do remember reading somewhere that Joost held Mangels in high esteem. Claus Mangels died in 1891, and Claus Spreckels died in 1908.”

“The grandsons of Claus Mangels were Ernest & Oscar Hueter, and in the 1920s the Hueter brothers purchased and developed the area in Balboa Terrace surrounding the Aptos school. Boxton-Zwieg built the homes designed by Architect Harold Stoner in this neighborhood further west along Monterey Blvd. which includes a street named Aptos. Learn more about the Spreckels, Mangels, and Zwieg connections at http://www.santacruzpl.org/history/articles/407/. 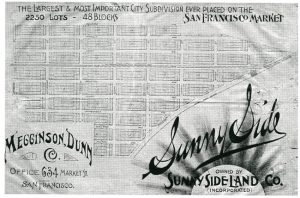 Spreckels Avenue was later changed to Staples. Another millionaire was added to Sunnyside when Moulton was changed to Hearst. Weiland was changed to Judson, Milton became Marston, and Sunnyside became Monterey Boulevard.