Adolph Sutro is well known as a former Mayor of San Francisco, owner of the Cliff House, and builder of the Sutro Baths. His lesser-known grandson, Adolph G. Sutro, teamed up with one of San Francisco’s most prolific – yet largely unknown — architects, Harold G. Stoner, to bring their own legendary landmarks to the “City by the Bay.”

It was Sutro’s grandson who commissioned Harold Stoner to design the magnificent  medieval mansion that once stood on Mt. Sutro. The original plan (seen below) for what became the City’s highest sited home was featured in a 1930 issue of Architecture and Allied Arts. Two decades after being sold to ABC in 1948, the City deemed it a firetrap and required its demolition as part of the permit to build the giant Sutro Tower there now. 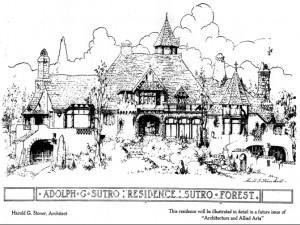 “Stoner specialized in atmospheric make believe,” notes the San Francisco Chronicle’s John King, and was “able to leap from storybook cottages to Spanish castles and give each a romantic air.” Adolph G. Sutro subsequently hired Stoner in 1934 to wave a magic wand and bring the warmth of the South Seas to the City’s windswept and foggy shoreline with a new “Tropic Beach” façade for the entrance to the Sutro baths.

Stoner’s façade (below) over the original Sutro Baths entrance (right) has been referred to as Art Deco or Coney Island inspired. The caption for the picture of it lit at night (below right) boasts, “37,000 watts of electrical power light the new entrance … its modernistic architecture is an outgrowth of the … Chicago World’s Fair, coupled with western ingenuity and enterprise.” Born 1890 in Brighton, England, his design may have been inspired by the twin-towered Palace Pier Pavilion decorating the city’s famous shoreline. 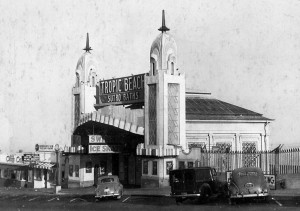 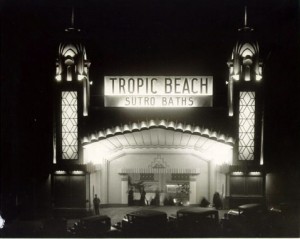 In 1937 an ice rink replaced the Tropic Beach built over the largest pool in Sutro Baths. Tom Bratton, the son of the manager of the Sutro Baths, believes that Stoner was instrumental in designing the steel trusses needed to construct an unobstructed area for the ice rink. 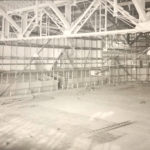 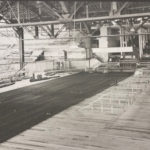 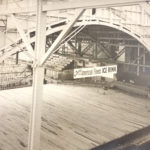 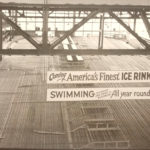 An artistic architect, Stoner designed and likely painted the murals initially surrounding the ice rink seen in the picture below. When the Whitneys bought the Baths from Sutro’s grandson in 1952, the arched tops of the towers and murals were removed in their remodel (below right). Stoner’s original arched roof canopy over the entrance and translucent tower panels were still visible, albeit much less attractive. The ice rink remained in operation until the Sutro Baths burned down in 1966. Tom recalls that only Stoner’s steel trusses remained. 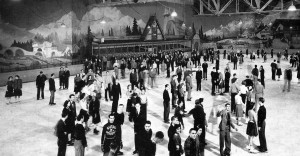 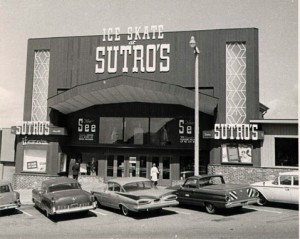