Before the Miraloma Park Improvement Club had a completed clubhouse in 1940, residents were busy fostering the neighborhood activism that is still in place today. One of the first projects was to get a bus line to the new neighborhood. To celebrate their success, the Club distributed a flyer entitled “Hooray for the Buses” in advance of the first bus arrival on Sunday, July 23rd, 1939, at 2PM:

“Let everyone in the district be on deck to welcome the first one. … The Honorable Mayor Rossi will pilot the first bus from Forest Hill Station to the corner of Evelyn Way and Portola Drive where he will be met by other City officials — the Municipal Band — several units of the American Legion — the Parkside Post No. 505 of the American Legion and their Junior Auxiliary Drum Corps — Boy Scout Troop 85 Drum and Bugle Corps and bicycle parade. The Municipal Band will lead the parade over the new bus route and return to Evelyn Way and Portola Drive, at which time he will address the group. Please join in and show the Mayor how we appreciate this long awaited service.”

A newspaper article following the event, “Many Dignitaries at Miraloma Fete,” noted that the celebration set a “new high in enthusiasm.” In addition to the Mayor, other dignitaries included Lewis Byington, President of the Public Utilities Commission, Commissioners John Murphy and John McCallum, City Attorney John J. O’Toole, and Supervisor James B. McSheehy, were greeted by club president Lloyd H. Berendsen:

“In the plaza at Miraloma Park, Mr. Berendsen told of the projects being fostered by the Miraloma Park Improvement Club for the benefit of the district and the city, especially school and playground and enlargement of Mt. Davidson Park to include the wonderful wildflower fields. Mayor Rossi promised his assistance when funds were available. [Seven acres on the east slope were added to the park in 1941]. Mr. Byington expressed the gratification of the Public Utilities Commission in being able to install the new service. The MPIC committee in charge consisted of Alexander Ratray, Boyd Oliver, Charles Dechent, Hoyt Colgate, James J. Yates, Frank Fickett, and William C. Ward.”

The San Francisco Municipal Transit Agency has put together a wonderful photo archive of the system’s history online. Katy Guyon of SFMTA found a blueprint of the original route dated for its 1939 inauguration. (Copyrighted Image Courtesy of the SFMTA Photo Archive, http://SFMTA.com/photo). 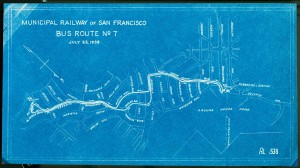 As you can see, the 36 Teresita was originally “7 Miraloma.” Katy found some more information in the book entitled “Inside Muni,” published in 1982 by John McKane and Anthony Perles: 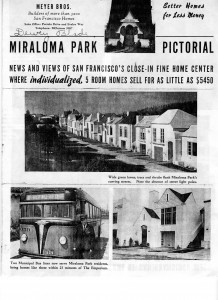 She also noted that “the 7 Miraloma/36 Teresita started as a Muni line with ‘motor coaches’ (early Muni buses—the first kind Muni had instead of streetcars, seen above at Rio Court). Then, in 1944, Muni merged with its main competitor, the private, for-profit transit company Market Street Railway. In the mid and late 40s, Muni started the process of physically merging all of Muni’s routes with Market Street Railway’s routes, which was very complicated—in particular because the two systems had been designed to compete with each other so there was a lot of redundancy in the routes. As part of this process, the 7/36 route was changed a bit and the line eventually got a new number in 1949.”

The original route, which turned around at Rio Court, was extended with the building of Miraloma Park south to Forester St. and once went all the way to the K streetcar terminal and Junipero Serra Blvd. Additional changes included a turnaround up to the top of Mt. Davidson and at the Balboa Park BART station. When BART was completed, it funded the “Miraloma Ranger” shuttle service for commuters to get a quicker ride to and from the Glen Park station. The shuttle was discontinued and now the 36-Teresita route ends at Mission and Cesar Chavez Streets via Glen Park BART station. Its connection to the Forest Hill Station has continued. Now if we could just get it to run more frequently and on time!