Welcome to the Harold G. Stoner blog for news about one of the Bay Area’s most artistic architects. Since my book, Bay Area Beauty: The Artistry of Harold G. Stoner, was completed earlier this year, I continue to discover more about this amazing man. This blog has been created to share what I have found.

The on-going effort by Google Books to scan historic journals has recently revealed what may be the earliest magazine article published about Harold G. Stoner. “A Well-Designed Group of Small Houses,” in the December 1922 issue of The Building Review, notes that “a group of three houses [designed by Harold G. Stoner] at Ingleside Terraces in San Francisco, planned to face a common lawn, but with entirely separate rear gardens, has aroused no small amount of interest among builders and home-owners of this region.”

The cottages still located at 160, 170, and 180 Urbano Drive, which follows the original one-mile long course of the historic Ingleside Racetrack, are seen below as they looked in 1922 – before they were surrounded by many more homes. 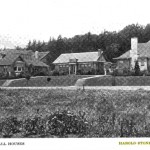 Ingleside Terraces was one of the first residence parks built in what was considered the outsidelands of San Francisco – the area west of the Twin Peaks which city dwellers initially considered to be suburbs as revealed in this article. “A mere house, after all, is not in itself a home – there must be a yard or garden for the children to play in – some trees, shrubs and flowers and a bit of lawn or terrace, else why bother to go out of town! … when one has decided to build, sacrificing apartment-house conveniences and the three-minute walk to business to a thirty-minute trip night and morning, he feels he that he is entitled to a few feet of earth to play upon, and decidedly objects to being crowded on a narrow lot with the next door neighbor within handshaking distance.”

Here Stoner may have first utilized a community-oriented site plan that he would later replicate in nearby Monterey Heights, as seen here along Monterey Boulevard. 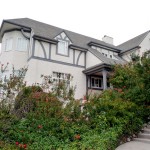 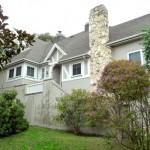 “The three lots comprising this plot [on Urbano Drive] are fifty by one hundred feet each and terraced to the street level. The central house is set back about one hundred feet from the street, while the others facing each other present an interesting side-view with southwestern exposure … The plan as here described, of a group of detached houses is especially appealing to friends, acquaintances or members of a family who want to live near, but not with each other, and is an expression of the ‘community’ idea with modifications which is becoming more and more popular in planning suburban dwellings.”

Stoner not only emphasized community in his site plans, but also in his home designs which he highlighted in one of his advertisements, “Here the feeling of a real home is found and one awaits with an anticipation of pleasure, the invitation of the host to enter.”